Home » Uncategorized » Allision vs. Collision | What is The Difference?

You’ve probably heard the term collision, frequently used in discussions of vehicle accidents. But you may not be familiar with the term “allision.”

Despite advancements in navigation, ships still have accidents while traveling the waterways. These accidents may happen due to bad judgment or other human errors. The rules of maritime law, also known as admiralty law, apply to maritime legal issues and questions, such as maritime injuries, shipping, cargo, transportation of goods and passengers, and accidents.

Maritime law varies among countries, but in the United States, federal courts have jurisdiction over all maritime laws, lawsuits, and claim matters.

Who Is Responsible for a Maritime Crash?

Collisions and allusions typically involve many complex laws. However, if the vessel was in navigable waters when the accident occurred, U.S. maritime laws typically govern liability.

For example, the Jones Act is a federal law that regulates United States maritime commerce. It requires goods shipped between U.S. ports to be transported on ships built, owned, and operated by United States citizens or permanent residents.

Fault is the basis for liability for collision under the admiralty law. Every officer and vessel operator must adhere to the applicable Rules of Navigation, which include the following:

Injuries resulting from allisions can fall within several federal laws.

For example, under the Louisiana Rule and the Oregon Rule, the law holds a moving vessel liable when it strikes a stationary object. Therefore, injuries and property damage resulting from the allision should be the vessel operator’s responsibility.

Have You Been Injured in an Offshore Accident?

Accidents involving marine vessels can result in injuries and losses that affect many people. If you have been involved in a collision or allision, you may be entitled to recover compensation for your injuries. 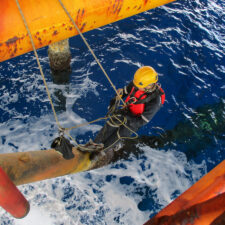